Every day you may pass by a hundred people or more, but you don’t know the experiences, knowledge, thoughts, dreams and memories of all the people that you pass.  Each person is a sort of mysterious universe, sometimes even to themselves.

Similarly, while we often ask people that we meet what they do for a living, the answer may not be deeply informative, in that we may not really know much about their chosen profession, on a practical level.

Michael W. Barnard, who teaches in the David Lynch MFA in Film program at MUM, could be described as an artist, a photographer, and also with a broad array of titles in the film industry: Director of Photography, Film Editor, Producer, Screenwriter, Visual Effects Artist, and Director. He can do and has done all of these.

But while each of these titles are comfortable handles that we toss about in discussing this or that movie, in reality, we have little sense of what, for example, a movie director actually does.

Sitting down with Michael over a couple of lunches at the North Dining room in the Argiro building on the MUM campus, I asked some questions designed to clarify the role of the director in a film or TV production, while also gaining insight into his experiences in the industry.

Michael’s presence in the Annapurna Dining hall at MUM could be seen as the closing of a circle. While many know him by the list of titles above, not everyone knows that many years ago just after he completed his training to become a TM teacher, Maharishi asked him to stay on and start a film department. He then spent the next 7 years making films for Maharishi and the TM organization.

In 1978 he and his family moved to Los Angeles and Michael began working as an editor on movies, TV shows and documentaries. Then, in 1980, he started producing and directing music “clip reels” to promote Motown artists such as Rick James, Stevie Wonder, Lionel Richie and Smokey Robinson. In those days, these promotional “clip reels” were produced by all the major record companies and this was the inspiration for bold new a new idea – MTV.

The founders of MTV realized that all they had to do was to create a TV channel to market these clip reels,  which the record labels gave them for free, and the whole music video world was born. Michael’s company quickly became one of the leading LA-based producers of music videos in the 80’s.

And now he is bringing all of that history full circle, to share his deep background in film and TV production with the students of Maharishi University of Management, a journey that that, after all, started with Maharishi.

But there’s that word again – the director – just what is that? And why is there such a big to-do about who the director is for this or that movie? Fortunately Michael can convey an insider’s view into this otherwise mysterious topic, over lunches that include, among other things, all of the rice and dhal that you can eat.

Even within the role of director, Michael indicates, there are many sub-roles: casting, negotiating, scheduling, script interpretation, and supervision of lighting, costuming, location and camera angle choices.

The director is responsible for turning the written script into a visual presentation. That means conceptualizing and planning all of the shots that are necessary to portray a particular dialogue, sometimes even arranging for actual storyboard drawings that depict every shot that needs to be done for each scene.

The director may have to deal with cost limitations regarding how many takes or attempts are made at capturing the perfect rendering of a particular scene, or a “beat” which is a subset of a scene, from an actor’s perspective. There may be a producer on set, whispering in his ear, cautioning him about cost overruns.

The director may also, over the course of his career, have to deal with unbelievable production disasters, such as the theft of all the money deployed to a catering company so that an entire crew gathering at 6 am has no breakfast (and even worse – no coffee). Or some guy running off with all the sound equipment. Or a foreclosure on some subcontractor’s computers that means you have to grab all of your finished film and relocate right away.

Of course, there is also the classic activity that we think of directors doing, i.e. –  giving advice to actors on how to approach a particular scene so it is in accord the director’s vision of the overall film.

But mostly, according to Michael, a film shoot is like an enormous parade marching downhill: it simply can’t be stopped once it starts moving, and the director has to be able to function at full speed, coordinating, guiding, conducting, and making quick but effective decisions for the entire process, even if, in the case of a movie, the parade takes weeks or even months to complete.

Just one day in the life of a director may start at 6 am, after five hours of sleep, where, if you are Michael Barnard, you make a point of being the first person on set, as the most prepared person on set, and you spend all day shooting scenes that you have already planned out in detail*, orchestrating camera angles, lighting, and actor performances so as to hopefully get a series of scenes shot, such that, when the actors and other tech support people go home at the 12 hour point, you can sit down with the production designer, the editors, and a few others to decide what can be considered complete from the day’s work and what needs more work.

Add to this complexity the fact that, at least with Michael, you may be shooting a scene blocking rehearsal (where blocking means getting the positioning of actors and cameras stabilized) while on another set nearby you have a final shoot set up for another scene, and after the rehearsal is completed (and you sometimes may use those less pressured versions in the final cut), and you get a very complex and dynamic day indeed.

But that day is just a point on a long line that, for the director, started long ago, often working with subordinate coordinators and artistic professionals in making casting, location, rewriting, wardrobe, and other decisions such as the movie’s “look”, all in the interest of an artistic, compelling, thoughtfully crafted, meaningful and financially successful film.

If you have sense by now that a movie director’s job that has similarities in its complexities and demands to that of an Army general, then you are on track to understanding what Michael’s world can sometimes resemble, even if you are just having lunch on an otherwise quiet university campus in Southeast Iowa.

To get a sense of the many aspects of Michael W. Barnard’s film and video work, see www.boltpix.com.

To be fascinated by a number of visual celebrations of multi-image symmetry and some of the wittiest (and most meaningful) art titles anywhere, see Michael’s innovative photographic art work at www.photofields.com.

*The director typically breaks the script into scenes (if it is not already so specified), breaks that into shots, and creates a shot list. 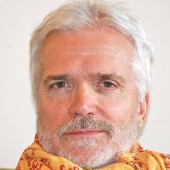 Paul Stokstad is the MUM Alumni guy and has a background in web marketing, writing, teaching and performance